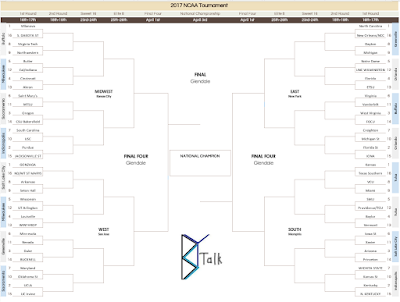 Lots of shuffling in the seedings after there were 2 upsets in the Big 12 tournament.  Kansas was upset by TCU 85-82 and Kansas State knocked off Baylor 70-64.  I think Kansas will still be a number one, but I think overall Villanova and North Carolina surpass them on the 1 line.  I also think the win by TCU puts them in the field of 68 in a play-in game against Providence.  I think Baylor’s
loss drops them to a 4 seed, with Florida St moving up to the 2 and West Virginia moving up to a 3 in the East Region.  Syracuse and Wake Forest both lost in their respective tournament games so I think they played themselves out of the tournament.  I also think Marquette played themselves out with their loss to Seton Hall in their first game.  I also have Louisville dropping to a 4 seed after losing to Duke in the ACC tournament.  Taking their place at the 2 is Purdue, while Duke moves up from a 4 to a 3 seed.  With Kansas’ early loss, I think one of UCLA and Kentucky could be in the mix for a 1 seed with an impressive showing in their respective conference tournaments.
As of now here are the Last 4 In and First 4 Out
Last 4 In: